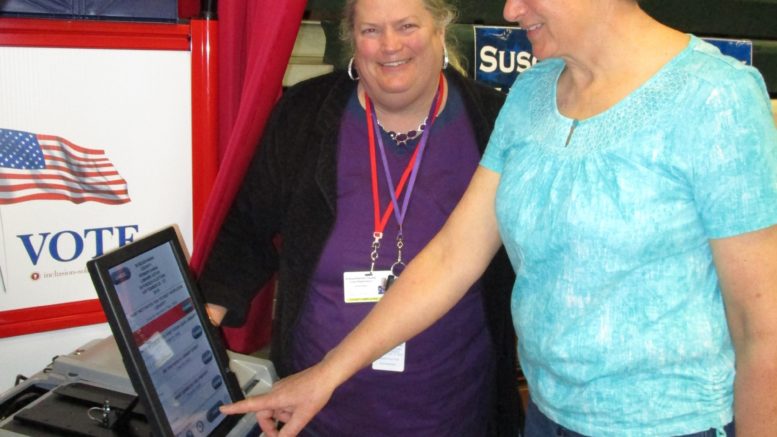 The event, which began 30 years ago and was originally known as Dairy Day, gives Elk Lake kids the day off school and features vendors displaying agriculture related products and a lunch provided by Cabot Oil & Gas.

But off in a corner of the Elk Lake High gymnasium stood Macy Rudock, Susquehanna County’s director of elections and voter registration.  Behind her sat one of the new voting machines to be put to use shortly in the April primary election and the all important November general election.  With recent changes the state legislature has made in the way Pennsylvanians may now vote, the machines have become the talk of the town.

Technically known as a Unisyn voting systems OpenElect FreedomVote Tablet, the machine resembles the automated self checkout stands seen at some supermarkets and in some aspects functions much the same way.

A touch pad similar to a Kindle tablet greets the visitor and offers an array of functions.  A gentle finger on the screen records the selections and, once completed, prints out a ballot which is then deposited into a voting box.  The machines are ADA compliant and come with various attachments which make them accessible by the blind, those with mobility problems or those who cannot otherwise operate the touch pad.

“When you get to your polling location on election day you sign in and are assigned an individual bar code which will only be usable for 10 minutes and which becomes unusable after it is scanned,” Rudock explained.

“Voters will take the barcode and scan it in at the machine.  This will cause the machine to display the voter’s precinct information.  At that point the voter should confirm that the information is correct and then may go through and select the votes they want to make. The screen will then display a review screen which allows the voter to confirm that they voted in the way they intended. If the correct votes are displayed the voter may then print out the ballot,” she said.

“Then this ballot is treated just like a regular paper ballot because it is a paper ballot,” Rudock said.

The paper ballot is then sealed into an envelope and placed in the ballot box and eventually taken away to be counted.

Asked what question she has heard the most so far, Rudock didn’t hesitate:

Changes in state voting laws have now given voters the option to vote by mail-in ballot and absentee voting.

“But they have a deadline prior to the election so if that is the option you would like, I suggest that you get on applying for those right away,” she said.

Pennsylvania’s primary election is Tuesday, April 28, and the last day to register to vote is Monday, April 13.  You must apply for a mail in or civilian absentee ballot by April 21. April 29 is the first day to register after the primary.  May 5 is the last day for the board of elections to receive voted military and overseas absentee ballots.  (Those ballots must be submitted for delivery no later than 11:59 p.m. April 27.)

The general election will be held Tuesday, November 3 and the last day to register for that election is Monday, October 19.

Last fall the state legislature added for voters the option of voting my mail if they choose not to go to the polls or are unable to get to the polls on election day.  Voters do not need to give a reason or excuse.

“This is the first election in which Pennsylvania voters have the convenient option of voting by mail-in ballot, without having to provide a reason for choosing it,” Pennsylvania secretary of state Kathy Boockvar announced recently.

By Googling “FVT Voter Instruction” you can see a brief video explaining how to use the OpenElect FreedomVote Tablet but some of the options shown may or may not apply.

“Well, people are very concerned about using the machines and handling the paper ballots but the machines are very easy to use,” she said.  “That’s why we have them set up here today at Ag Day.  You can get demonstrations.  I’m very excited about all this new equipment.  The machines are not online so they do not store any of the information.  That’s the thing that people were worried about.  It just prints out your little ticket, you take your ticket and put it in the box. So it’s all going to prevent overvoting,” Arnold said.

Arnold does not think the machines are so complicated as to confuse those voters who may not be accustomed to using computers or those who simply don’t like the idea of using a computer to vote.

“They’re very easy,” said said.  “You know, people don’t like change and I think that once they get introduced to it and get familiarized with it I think they’ll become more comfortable.  There will be people there to assist them at the polls if they need help,” Arnold said.

Rudock’s office will have demonstration voting machines set up this summer at the Harford Fair and in all the libraries in the county.

Arnold also said that the machines will be available to organizations for demonstrations.

“We will be glad to do that.  So I think the more we educate people and show them and train them, the more comfortable they will be,” she said,

Voters with questions are encouraged to please call the county Voter Registration Office at the  Susquehanna County Courthouse at 31 Lake Avenue in Montrose at  (570) 278-4600, ext. 4090, or to contact them by e-mail at vrs@susqco.com.