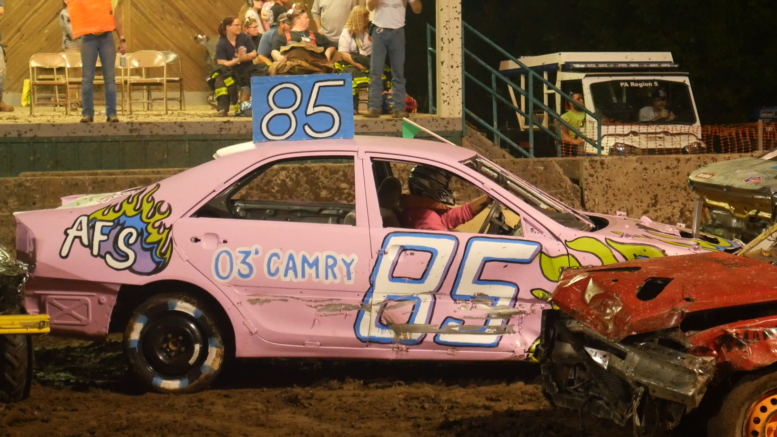 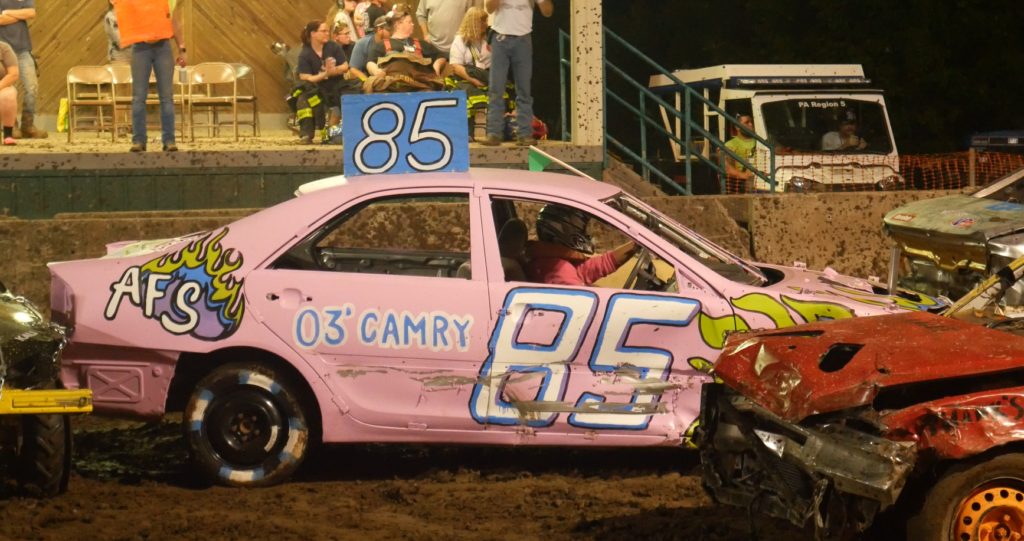 In those years, she amassed some of her best memories thanks to that car. “My husband and I were high school sweethearts,” Luecke said. “It brought me to Montrose to visit him.” And when he was a student at Mansfield University, the Camry took her there to visit on weekends. It even carried her to visit her father in Florida a couple of times.

Luecke found out it had an exhaust leak in December and decided it was time to let the car go. That’s when her co-worker, Natasha VanGorder, stepped in with the idea to enter it in the Harford Fair’s Jackpot Demolition Derby.

The Camry was painted pink for the event. “The decoration was all Natasha,” Luecke said. “She wanted to make it girly and prove girls can do the derby and look cute doing it.”

“I’ve actually been going to the Harford Fair my whole life,” VanGorder said. She’s watched family member Jake Romain compete in the demolition derby for years. This time, Romain was watching her drive.

VanGorder had been keeping Luecke and her family updated on the process of getting the car derby-ready. “Sending them the videos of the windows being smashed and the car torn apart was great,” she said.

Leucke’s father passed away from COVID the morning of the derby. She said she had been texting him updates about the car. “He was excited to see the videos and wanted to watch that car go out with a bang,” she said.

She felt that going to the derby was a good way to begin saying “good-bye,” as she was surrounded by family and friends for the event.

VanGorder crashed her way to a fourth-place finish. “I was out there to have fun no matter the outcome,” she said, noting that it was an emotional day.

The car was not totaled, and VanGorder plans to run it in the derby again next year. “Part of my dad lives on again in 2022,” Luecke said.

“The roar of the crowd! That got me more worked up than crashing cars,” VanGorder said, as she collected the “Fan Favorite” award.

Luecke said her father would have been excited that the fans loved the car. “He was probably riding in the back seat, enjoying every minute of it.”