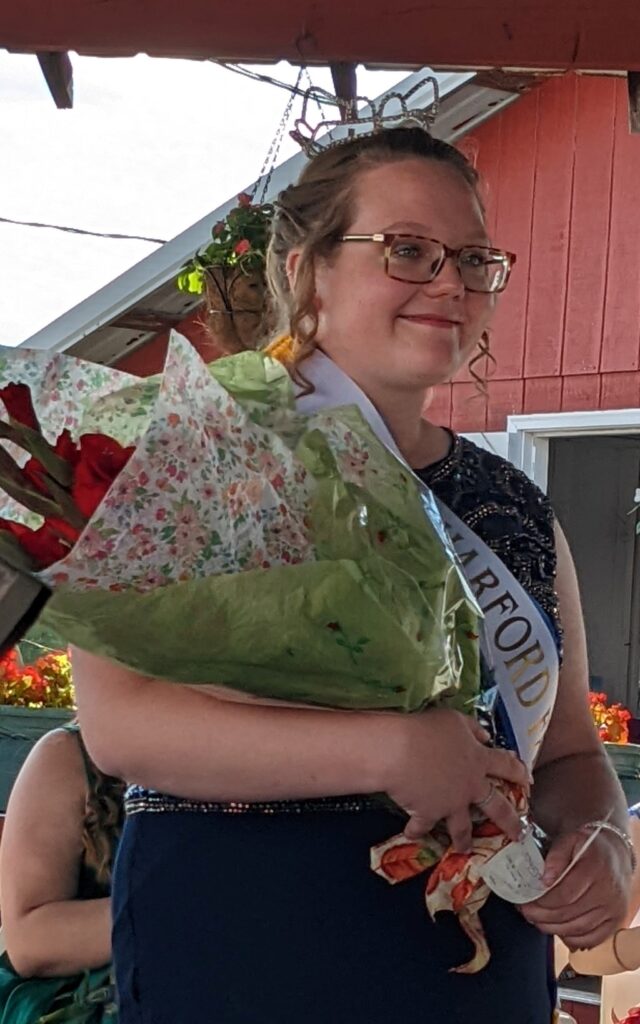 Emily Hawley joined the royal ranks on Monday as she was crowned queen of the 2022 Harford Fair. Hawley is the 30th Harford Fair Queen.

Zoey Wright, age 16, will serve as the alternate queen. She is the daughter of Chris and Sarah Wright, attends Lackawanna Trail High School and is also enrolled at Lackawanna College.

Hawley was presented with a monetary award by Ed Price by the PA Trappers Association.

Hawley, Wright and fellow contestant Amanda Iveson, 19, participated in a preliminary round at noon on Monday, followed by the final competition which got underway at 4 p.m.

The contestants delivered speeches with the theme, “Why you should come to my fair,” and also answered a random question before the judges adjourned to deliberate. Diana Cordes, Robyn Henderson and Mark Madden served as the judges for the Queen Contest.

Last year, Queen Coordinators – often called the “Queen Moms” – Ginny Beeman and Deb Chidester announced that they would be transitioning from their roles to “Queen Grandmoms,” as new coordinators Erica Lopatofsky Kryst and Nicole Chidester Zaleski take on the position. Both are past Harford Fair queens. Beeman and Chidester, did return to crown Hawley as the 30th Harford Fair Queen.

Beeman and Chidester were presented with gifts, including a personalized “Queen Mom” sweatshirt.