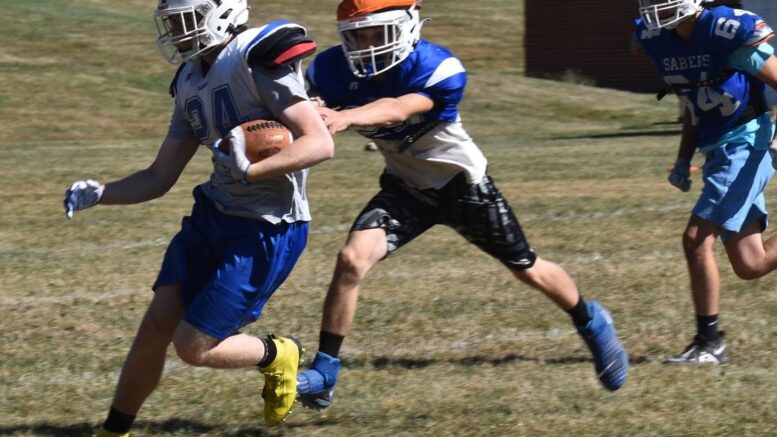 Susquehanna running back Layne Fisk (with ball) finishes off a run during the practice. PHOTO BY COREY GESFORD 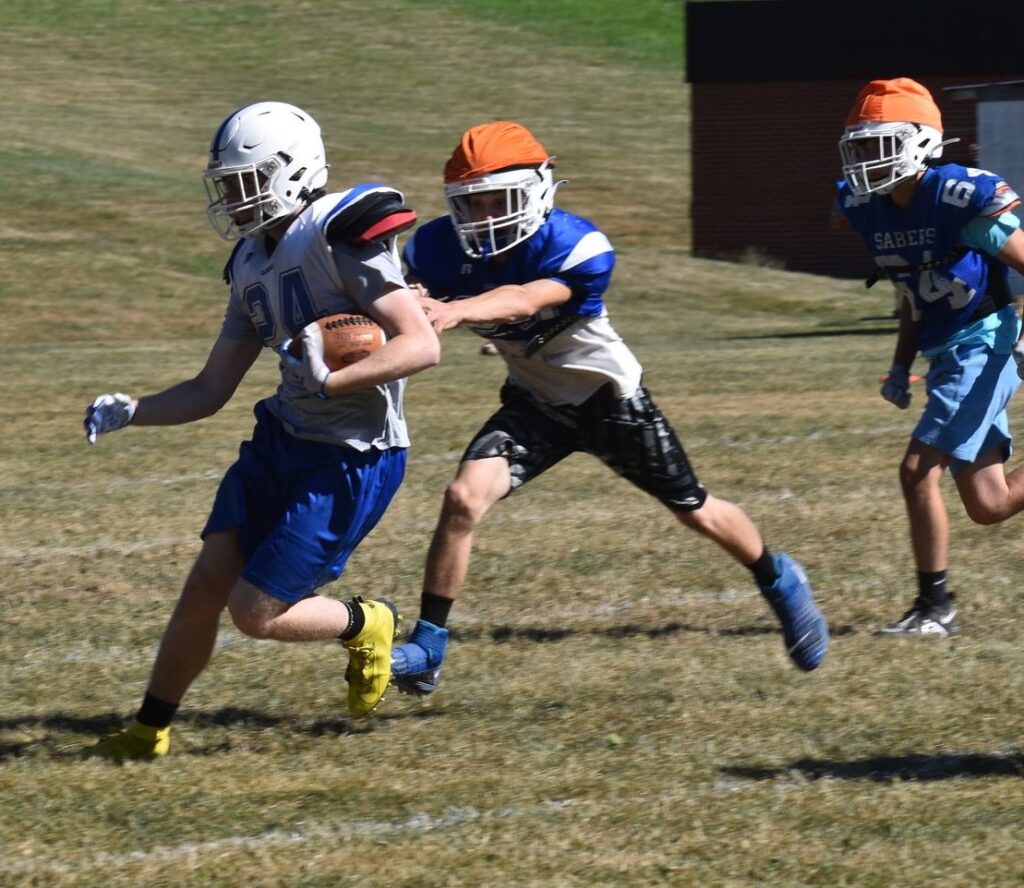 Susquehanna running back Layne Fisk (with ball) finishes off a run during the practice. PHOTO BY COREY GESFORD

That’s the feeling during early practices for the Sabers’ football team as the team kicked off their official season with heat acclimation week. The team will rely on a core of returning players and an influx of new blood this season.

“Practices have gone well,” said Susquehanna Community Head Coach Kyle Cook. “Our numbers are low, but energy is good, and we are gelling as a team.”

The Sabers had 25 players on the field for practice Friday while enjoying the break in temperatures.

“The first few days were hot, it’s not too bad today,” noted senior Kaleb Shimer. “We’re getting used to the hot weather.”

The Sabers will be young, small, and lacking in depth on the offensive line – something that concerns Cook.

“We need to get the line consistent and keep them focused,” said Cook. “We’re thin on the line, so guys have to know all the spots in case a man goes down and we have to shift guys.”

Maintaining that consistency and getting protections down is important in the Sabers’ scheme and to quarterback Colton Stone.

“We have to reach consistency and get our timing down,” said Stone. “But it’s great how hard the guys are working and pushing each other.”

Incorporating the younger and newer players will be a key to Susquehanna’s success and it will take the leadership of Stone, Shimer and other key players Layne Fisk, and JJ Rosa.

“We try to keep them focused and understand you take a beating and then you get right back up,” said Fisk. “It’s a big adjustment to varsity football.”

Fisk and Shimer return as the leading candidates to take over the running responsibilities from the graduated Brad Cottrell and Jesse DeLousia. Fisk also returns as the kicker, a position he has excelled at in the past.

Rosa is the most decorated Saber returning this season. The senior Defensive Back/Wideout was a First Team All-Star on defense a year ago after intercepting four passes. He also had 21 receptions on the offensive side.

“We’re young and small, but things are going well,” said Rosa. “We’re teaching the young guys how to compete, some of them are getting it and others have to step up yet.”

With the cooperative agreement between Susquehanna and Blue Ridge for football the Sabers are forced to play in Class 2A for Districts, but they’re optimistic on the season.

“Personally, I want to have a decent season, but more importantly I want us to make playoffs,” said Shimer. “I think if we can be physical and guys step up, we can do that.”