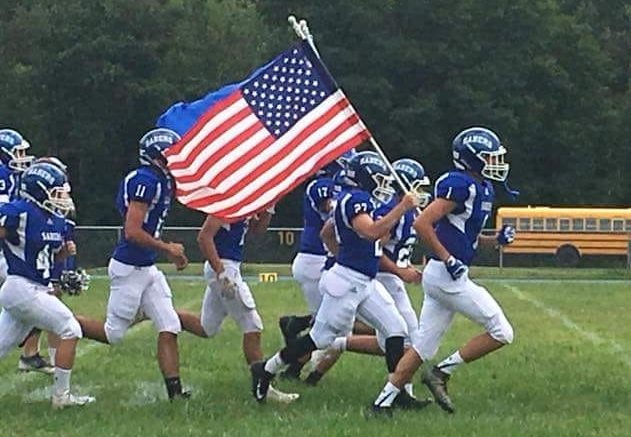 The Susquehanna Sabers storm William Emminger Field earlier last season. The Sabers fell to Dunmore in the District II Class 2A semifinal to conclude their season.

Dylan Dubanowitz broke open a tight game with a lead-extending pick six to spark Susquehanna to a season opening win on the gridiron over Wilkes-Barre GAR, 33-24.

With the Sabers holding a slight 13-12 halftime lead Dubanowitz stepped in front of a pass intended for GAR’s Malachi Williams during the Grenadier’s first possession of the second half and raced 24 yards to the house to give Susquehanna a 19-12 lead and the momentum. Mason Deakin added the extra point to put the Sabers up 20-12 and they never looked back.

Both teams started off slowly working out the opening-game jitters before GAR struck first when Justice Lomas scored on a five-yard run early in the second quarter. Susquehanna quickly answered as quarterback C.J. Stone hooked up with Deakin for a 35-yard touchdown pass to even the score.

Lomas put GAR ahead again with the second of his three touchdowns with a 20-yard run midway through the second quarter. However, the Sabers answered again with a methodical nine-play drive that senior Running Back Sam Cosmello finished off with a three-yard touchdown run, with Deakin added the extra point to give Susquehanna the lead that they never would relinquish.

Aside from Dubanowitz’s interception, Susquehanna shored up the outside edges and limited GAR to 101 yards in the second half.

“The first half we really were getting beat outside but the second half we had a great team effort in stopping the outside run,” said Susquehanna Coach Kyle Cook.

GAR quarterback Kam Taylor accounted for 53 of those yards when he got in the open field and raced for touchdown to pull GAR within two 20-18. But GAR was unable to convert either a two-point conversion or extra point on anyh of its touchdowns.

The Sabers put the game away in back-to-back possessions when Cosmello capped another drive with a three-yard plunge into the endzone, followed by a Deakin extra point to put Susquehanna up 27-18.

After forcing GAR to punt, the Sabers took advantage of bad snap on the punt attempt and Garrett Decker scored two plays later to put the final touches on Susquehanna’s scoring.

“The running game and read options gave us tons of openings,” Stone said. “Mixing up our formations caused the defense to become a bit unaware of the play sets we were running.”

Lomas scored on a six-yard run with just under seven minutes to play to set the final score but GAR was unable to mount another scoring drive and the Saber running game that amassed 203 yards helped keep GAR’s quick-strike players off the field.

Aside from Cosmello’s two touchdowns and 52 yards, Adam Roe led the Saber balanced rushing attack with 62 yards on 12 carries. Stone chipped in with 53 yards on seven carries and Decker added 26 yards along with his one score.

Stone was 3-6 passing with one touchdown and 60 yards. Aside from Deakin’s touchdown grab, Dubanowtiz had a 16-yard reception and Anthony hauled in one pass for nine yards.

William Perry led the Susquehanna defense registering six tackles, including three for a total loss of 12 yards and 4 assists.  Dubanowitz had five tackles to go along with his interception. Linebackers Decker and Cosmello combined for nine tackles and 10 assists and each had a pass deflection. Roe had the lone Saber sack and and two of his three tackles ended up in 11 yards for loss.  Deakin chipped in with three pass deflections.

“I thought it was key that we stayed on our assignments and didn’t try to do other people’s (assignments),” Deakin said.

Be the first to comment on "Sabers win season opener"