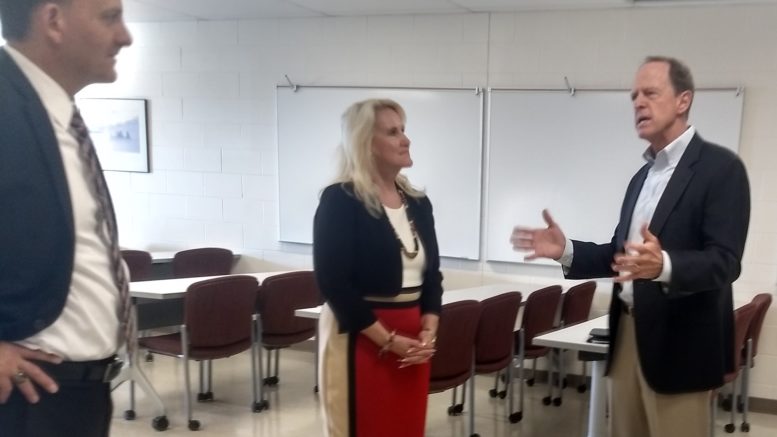 Sen. Pat Toomey, R-PA, is looking to schools like the Susquehanna County 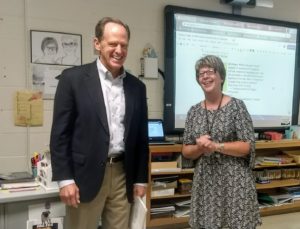 Career and Technology Center to address the state’s workforce issues.

Following the tour, Toomey said, “The single  biggest challenge that Pennsylvania employers face is finding skilled workers for the job openings they have.”

He said the people are graduating college with a “mountain of debt and not necessarily having the skills for the jobs that are out there.”

Cuomo told the senator that SCCTC was the only “true” vo-tech educational center in the area and Toomey asked the administrators about the programs, students, relationship with the sending schools, and the business and industry partnerships.

Davis spoke about the competency-based programs, as well as apprenticeship and co-op opportunities and career planning with students.

She said that of the graduates, about 35 percent move on to college, while 50 percent enter the workforce; while others join the military.

Davis said she would like to see dignity restored to those employed in the skilled trades.

Davis responded that one welding graduate was making an annual salary of about $80,000.

Cuomo said the work ethic in rural northeast Pennsylvania does not hold a diminished view of a person employed in a technical field. Although more slowly, people in the suburban areas are starting to see value in preparing students for future jobs. “We are staring to see a cultural shift beginning in career fields,” he said.

Toomey said SCCTC could potentially be used as a model in other districts in the state.

“This solves some of the problems we have in a strong economy,” he said.

Be the first to comment on "Toomey visit focuses on workforce"