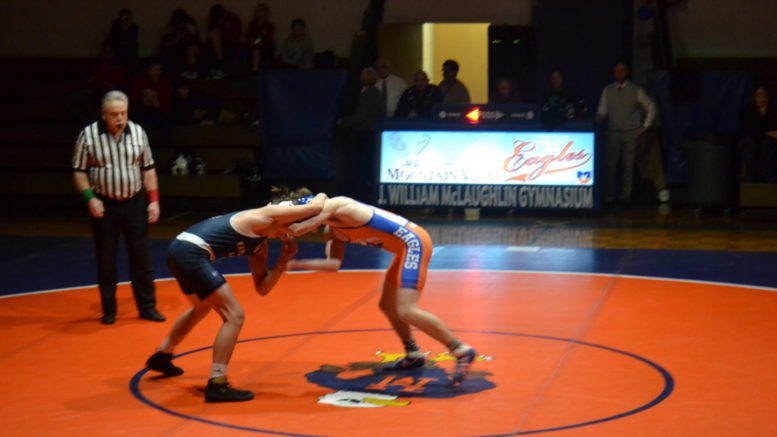 Blue Ridge and Montrose put up valiant efforts but were both eliminated from championship consideration by Tunkhannock in the District II Class 2A Duals.

Blue Ridge advanced to semifinals before bowing to Tunkhannock 61-15.

Kameron Shiffer led the Raiders when he earned six points with a pin 55 seconds into the second period of his 120-pound match with Tunkhannock’s Matt Morone.

Memphis Collins picked up Blue Ridge’s other six points when he collected a forfeit win at 106 pounds.

Blue Ridge’s Gavin Crawford suffered the toughest loss in the match when Tunkhannock’s Matt Rosentel took Crawford down with two seconds remaining in regulation to earn the 2-0 decision.

The Raiders earned their way to the semis with a 39-27 win over Wyoming Area as five Raider wrestlers earned pins.

Kaleb Shimer got the first pin for Blue Ridge when he took Vincenzo Giambria at the 2:37 mark of their 152-pound match.

Williams picked up pin wrestling at 182 pounds when he put Richie Hyzinski on his back early in the second period.

Collins had the shortest night when he pinned Autumn Dychess in 38 seconds of the 113-pound bout and Crawford got the last pin with 2:24 takedown of Adam Sigman at 126 pounds.

Zach Consla earned a hard fought 3-2 decision over Vincent Bowman at 195 pounds and Sheffer collected a forfeit win at 120 pounds.

The Raiders were eliminated in the consolation semifinals by Hanover Area falling to the Hawkeyes 47-30.

Blue Ridge got pins from Collins at 106 pounds when he fell Tyler Mizell in 45 seconds.

Shimer picked up a second period pin of Hunter Thompson at 152 pounds and Eli Aldrich needed just a minute to take care of Jacob Mercandante at 220 pounds.

Consla at 170 pounds and Williams wrestling at 182 picked up forfeit points for Blue Ridge.

Tunkhannock earned their way to the semis with a 67-12 win over Montrose.

The Meteors got a pin from both Larissa Taylor and Brandon Soules.

Taylor pinned Jeb Stephens at 113 pounds in the first period at 1:32 while Soules pinned Cole Stauffer midway throught the second putting Stauffer on his back at 3:07

Montrose then lost a heartbreaker to Wyoming Area 41-39 .

Dylan Geertgens earned a pin at 138 pounds when he put Rocco Pizano on his back at the 1:36 mark of the first period. Brendan Kanna picked up the next Meteor pin at 152 pounds when he fell Tom Collins in just over a minute.

Nick Harder also had a pin for the Meteors needing only 11 seconds to pin Dychess.

Derrick DeMann earned a 9-4 decision over Bowers at 195 pounds and the Meteors earned forfeit wins by Taylor at 120 pounds and from Andrew Rosevear and Gabe Morrison at 145 and 132 pounds respectively.

In a nonleague match Mountain View fell 60-9 to Nanticoke on Senior Night.

Jeremiah Schwartz led the way for the Eagles collecting a pin at 170 pounds when he decked John Pashinski at the 1:27 mark.

Be the first to comment on "Raiders, Meteors fall in District Duals"