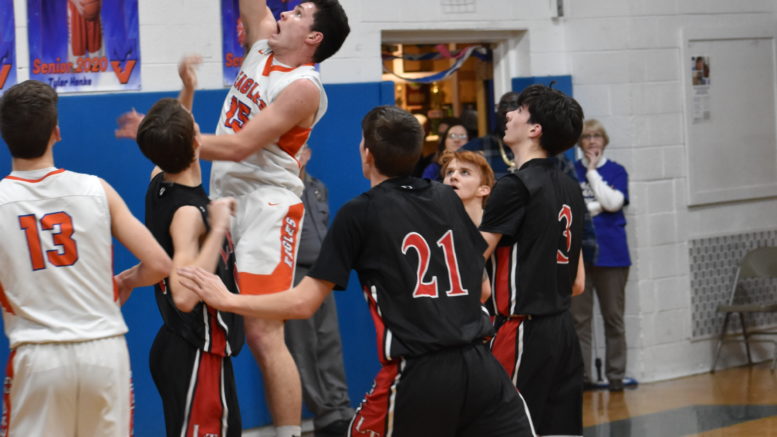 Mountain View’s Preston Petts rises above the defense to for two of his 10 points during the Eagles’ 64-43 win over Lackawanna Trail on Coaches vs Cancer Night. Photo by Sue Gesford 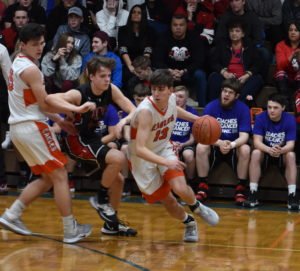 Mountain View’s Tyler Henke (13) uses a screen from teammate Preston Petts during the Eagles’ 62-43 win over Lackawanna Trail. The win put Mountain View and Trail in a tie for the Lackawanna League Division IV. Photo by Sue Gesford

raucous crowd out for the program’s Coaches versus Cancer event blitzed Lackawanna Trail 22-3 in the third quarter to join Trail at the top of the Division IV standings with a 63-42 win.

Trailing 31-28 at halftime Mountain View’s Jalique Gillyard drilled his third three-pointer and Michael Fanelli followed with a conversion of a three-point play and then drained a three-point shot of his own. Tyler Henke capped the run with a field goal before Trail’s Josh Rzcidulo hit a three-pointer to answer followed by a timeout.

“We worked hard on the boards and for the 50/50 balls,” said Fanelli. “I think the energy in the gym gave us all an extra boost to get rebounds on both ends.” 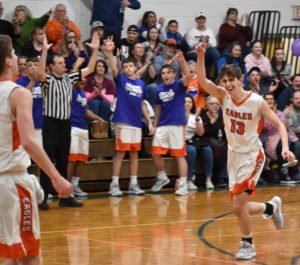 drained all six of their attempts in the first half.

But Mountain View weathered the barrage and stayed focused defensively to turn the tide in the second half, something that was not lost on Eagles Coach Joe Gibbons.

“They followed the gameplan flawlessly despite Trail making some shots early,” said Gibbons. “We stayed with it.”

Experience also played a factor for the Eagles who have one of the more experienced rotations in the division.

“There’s three staples to our program and brand of basketball – defense, rebounding, and offensive patience,” explained Gibbons. “This group of Seniors has had that for four years and understand the expectations.”

Fanelli led the Eagles with 18 points 10 rebounds and four blocked shots while Gillyard finished with 11 points and Petts joined them in double figures with 10. Tyler Henke added nine

Rallying from an early deficit Montrose chipped away at Susquehanna to prevail 38-37 for the Meteors’ first win of the season and Coach Reggie Hawkins’ first career win at the school.

Susquehanna got off to a fast start as Gavin Baker scored eight and Garrett Decker added two field goals and a pair of free throws to give the Sabers an 18-8 lead.

The Meteors began their climb in the second quarter as Sam Stashko and Mason Dieck combined for 10 points as Montrose cut the lead to 25-18 before halftime.

A balanced attack and stifling defense enabled Montrose to cut into the lead more pulling within 32-27 heading into the fourth quarter.

Connor Watkins helped propel the final push scoring five of his seven points in the fourth quarter as Montrose pulled ahead and Stashko added three more hold off the Sabers.

Stashko led Montrose with 13 points while Alex Warriner added eight with a pair of three pointers and Watkins chipped in with seven.

Baker paced Susqueahanna with a game-high 19 points and Decker finished with 10.

Blue Ridge used a big second quarter to pull away from Forest City and defeated the Foresters 59-48.

Leading 12-10 going into the second quarter, the Raiders held Forest City to three points and doubled up the Foresters 26-13 at the half.

Forest City’s offense came alive after halftime, but the Raiders maintained the lead with a 18-16 advantage to take 44-29 lead into the fourth quarter.

Calvin Scheideler scored 23 points to lead Blue Ridge while Gavin Rosa finished with 11 points and Ben Bleck chipped in with 10. 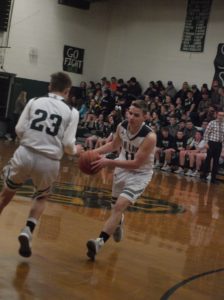 Elk Lake’s Jason Mowry (11) hands off to his cousin Matt Mowry (23) during Elk Lake’s game with Lakeland. The Warriors suffered back to back losses to Lakeland and Susquehanna. Photo by Tammy Mowry

Lakeland’s Nick Bertholf scored 8 of his game-high 27 in the second quarter as Lakeland pulled away in a 65-36 victory.

Bertholf had 10 points in the first quarter as the Chiefs opened a 19-12 lead. Brant Marshall had six for Elk Lake to keep the Warriors in striking distance.

However, Bertholf combined with Chris Mellon who had six in the second stanza to give Lakeland a comfortable 38-19 lead going into halftime.

The Chiefs picked up where they left off after halftime as Bertholf and Mellon combined for 15 of Lakeland’s 18 points and the Chiefs increased the lead to 30.

Be the first to comment on "Eagles blitz Lions, Meteors net first win"