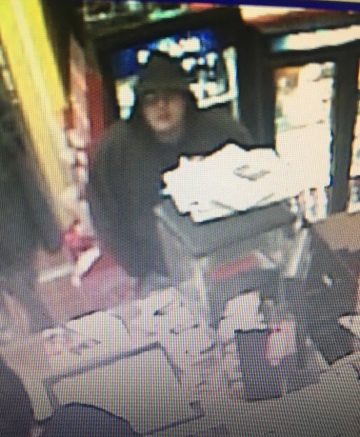 State police are looking for two men involved in the Monday, Feb. 3 robbery of a Lenox Twp. convenience store.

State police are looking for two men involved in the Monday, Feb. 3 robbery of a Lenox Twp. convenience store.

the Monday, Feb. 3, robbery of the Pump N Pantry in Lenox Twp.

According to police, two white males entered the convenience store on State Route 92 just before 11 p.m. The first male asked for two packs of cigarettes. As the cashier rang up the sale and requested payment, the suspect lifted his shirt, exposing the grip of a firearm in the waistband of his pants and demanded money.

The cashier opened the drawer and handed over the money.

The two men left the scene on foot towards Route 92 where police believe they fled west in a light-colored SUV.

Anyone with information is asked to call PSP, Gibson at 570-465-3154. Tpr. Roger Riddell is investigating.

Be the first to comment on "Suspects sought in PnP robbery"