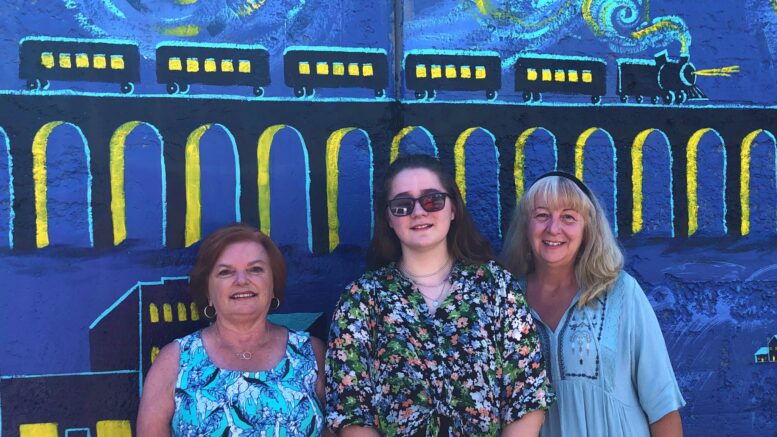 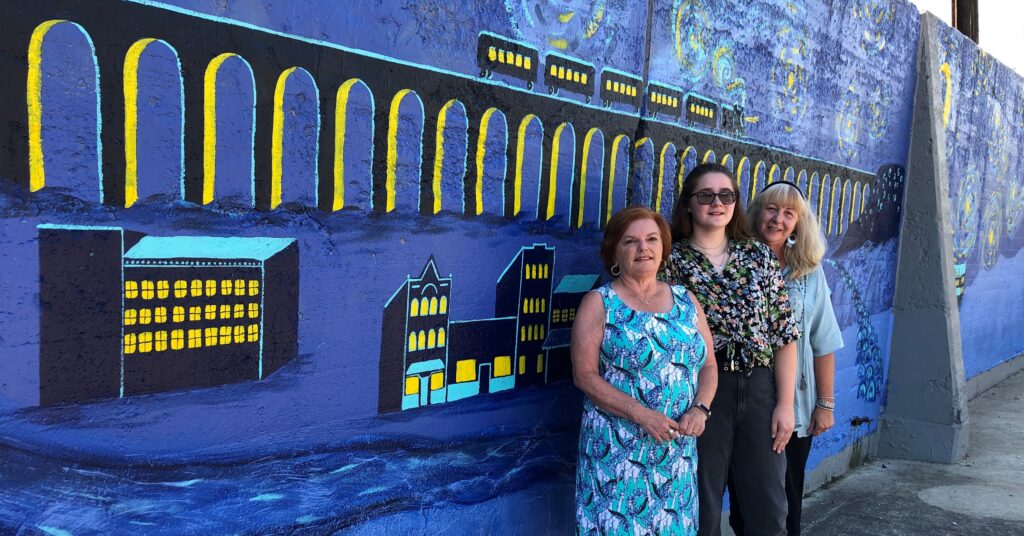 Kathy Matis, of SCDA, with mural artists Meghan and Michelle Kiernan in front of the Van Gogh-inspired mural with local historic additions including the Starrucca Viaduct with a train crossing it. The mural is located in the Shops Plaza on Erie Blvd. in Susquehanna. STAFF PHOTOS/STACI WILSON 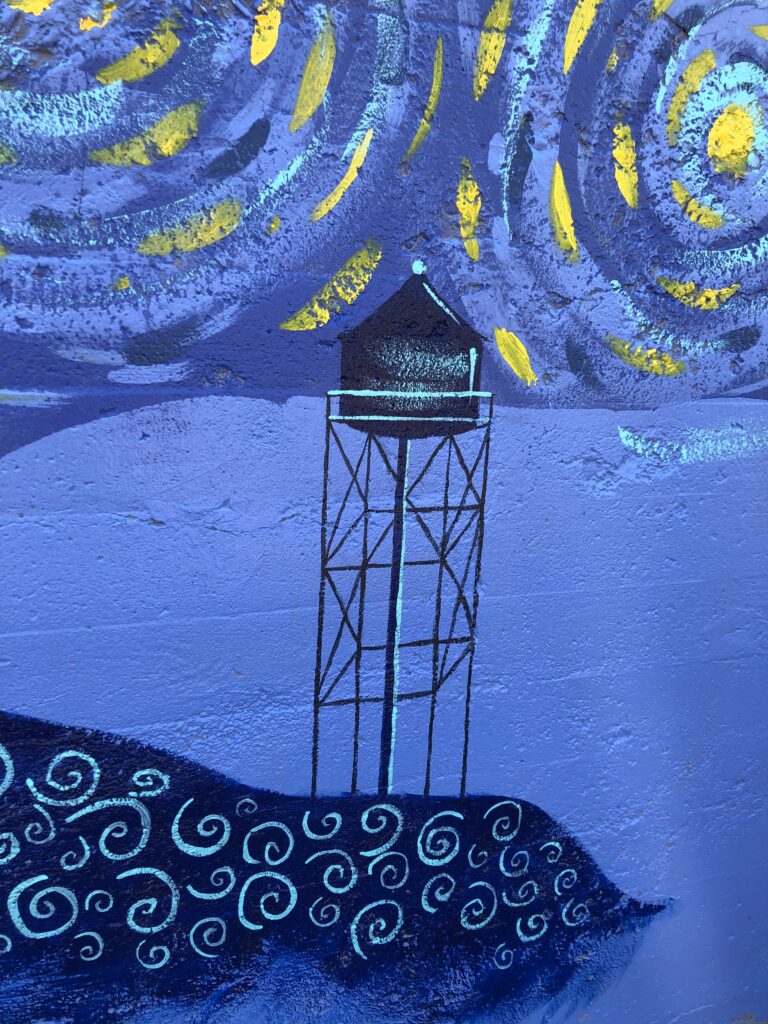 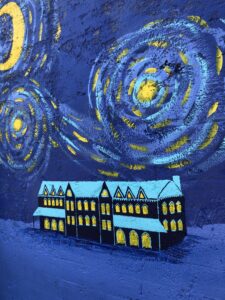 The Susquehanna Community Development Association (SCDA) has been talking for years about adding a mural to the wall that separates the parking lot of the Shops Plaza from Main Street above it.

Shops Plaza owner Ron Dubas had one request – that the mural include a train.

Kathy Matis, of SCDA, said the group put out a request for proposals and received an entry from Michelle Kiernan.

“When we saw Michelle’s (proposal), it was so creative,” Matis said. “It included so much of the town’s history.”

Michelle is widely known for her intricately painted rocks often posted on the Susquehanna Rocks Facebook page. Her proposal for a mural grew out of a painted rock.

“The rock was the starting point,” Michelle said. She drew her inspiration from Van Gogh’s Starry Night. A photo of the scene painted on the rock that included the Starrucca Viaduct with a train crossing it garnered a lot of positive feedback.

From there, Michelle took the idea from rock to canvas, and submitted it to SCDA for consideration for the mural.

The mural includes not only the viaduct and train, but also the local water tower, Starrucca House, United Methodist Church, and a line of storefronts – which Michelle says she used some “artistic license” with in the painting.

On Aug. 3, Michelle and daughter Meghan began their public art project and faced the challenges of the summer heat, rain and the texture of the wall.

Another challenge was the task of transferring the painting from the canvas to the large structure. “We just king of winged it,” Meghan said, while Michelle says she wished they had used a projector.

Meghan, a junior at Susquehanna Community High School, is also an artist. “I do a lot of drawing and painting,” Meghan said, adding, “I actually like digital art. It’s way easier to erase.”

“Meghan really prompted me,” Michelle said. “She had talked about wanting to do a mural on the Shops Plaza wall for years. So when the opportunity arose, it was meant to be.”

SCDA paid for the cost of the materials. An exterior paint was used for the mural, with plans to add a clear coat over it to add further protection. Matis said SCDA also plans to add more murals throughout the borough.

Since its completion, the mural has drawn positive feedback. “The outpouring of love and support has been very humbling,” Michelle said. 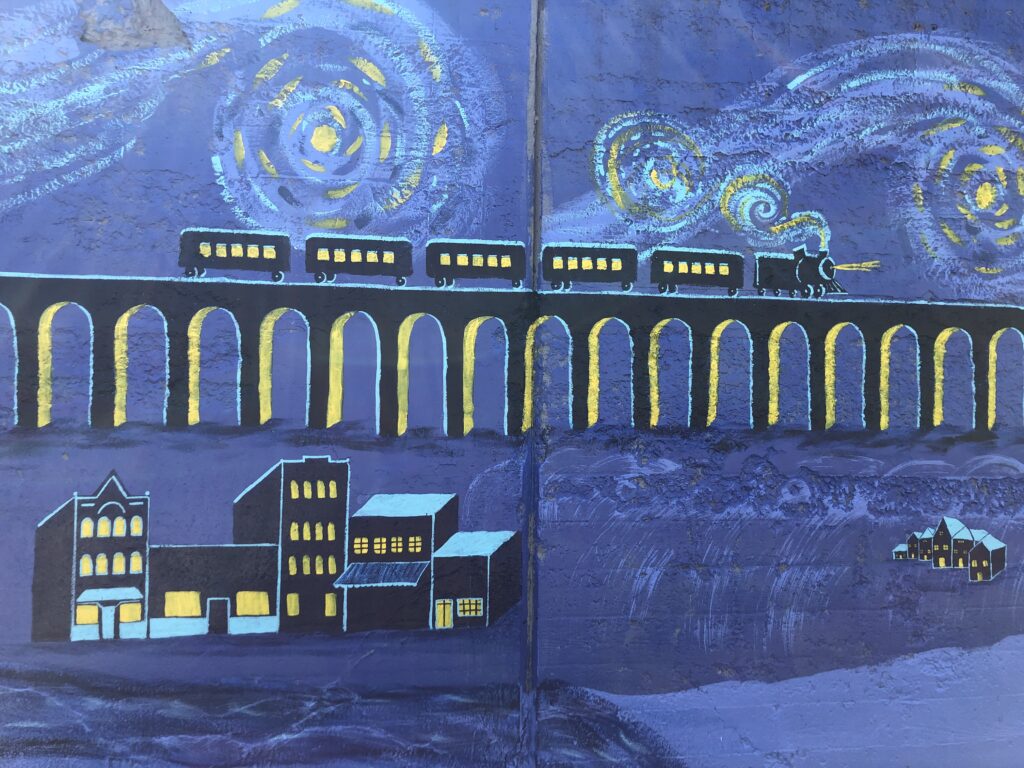 Sabers roll to win over Hanover

Be the first to comment on "Painting the town: Susquehanna Depot mural reflects local landmarks"