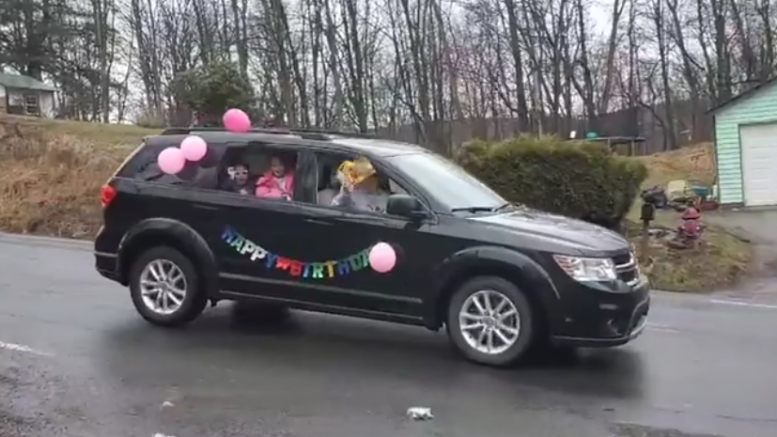 It marks the transition to the double-digit ages – the coming teen years finally in sight.

Many kids typically celebrate their 10th birthday in the usual way – a gathering of friends and family, cake, ice cream, and presents.

But efforts to hinder the spread of COVID-19 call for social distancing, and 10th birthday parties – like the one planned Saturday for Skylar Phonechanh – get cancelled.

“The original plan was for a spa party with friends,” said Skylar’s dad, Xaysonghkham Phonechanh. “But with everything going on, it had to be cancelled. She was feeling a little bummed out about it.”

“I was pretty sad,” Skylar admitted. Her actual birthday is April 2 -a day, she said, would have been spent in school with her friends.

Skylar’s mom, Ashlie Yoder Phonechanh, saw some people on the news who were “thinking outside the box” for their celebrations and the parents set about organizing a surprise social distancing birthday parade for their daughter.

Skylar’s parents contacted some of her school friends, her teacher, and the Susquehanna Depot Police Department. “I talked to Chief (John) Creamer and he was more than happy to do it,” Xaysongkham said.

Skylar was told a motorcycle parade benefit would be rolling by, so initially… she thought the police car leading the way was for that.

Skylar said, “My mom said dad was shopping and stuck behind the parade.” Bu thtne she saw his car come by… “and that is when I knew.”

In all, there were 25 cars in the social distancing parade. “My mom and I watched the video and counted all the cars,” Skylar said.

As the vehicles went by – decorated with balloons and birthday signs – some people tossed bags of candy and gifts. One present include a bag of Skylar’s favorite chips, a stuffed animal and some activities for her to do while at home.

“It was the best birthday I could think of during this time when you have to stay away from friends and can’t really hang out with family either,” Skylar said. “It still felt like I was special.”

Skylar said that by the end of the birthday parade, she was wiping away “happy tears,” and admitted she doesn’t really like to cry in front of her friends.

Mom Ashlie was also almost moved to tears. “The smile on her face was worth it,” she said.

Xaysongkham said, “We’re so happy this is such a great community that supports everybody and looks out for one another – especially in this time.”

And while the smile brought to Skylar’s face was big, everyone involved also seemed to share in the joy of the day. “I think everybody involved had a good time,” Xaysongkham said.

“It was the best birthday party,” Skylar said.

Sabers roll to win over Hanover

Be the first to comment on "Celebrating with a birthday parade"