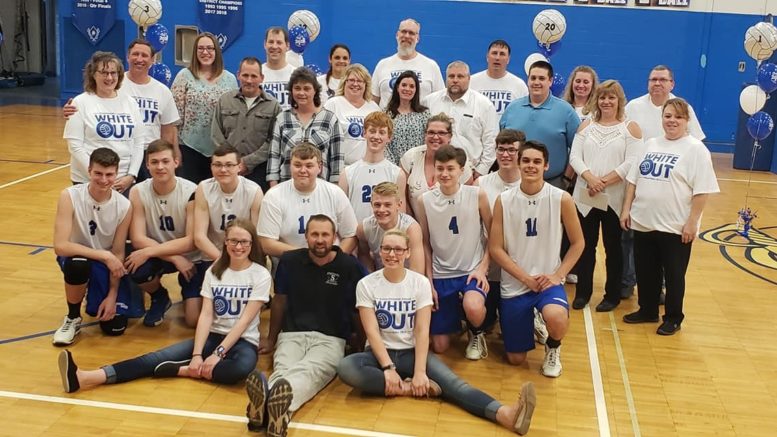 Susquehanna boys’ volleyball players, coaches, managers, and parents of the senior and junior players gather after the final home game of the season. The Sabers fell to Blue Ridge 3-0 on "Senior and Junior" night as Susquehanna honored both classes. Plans are underway for the two rivals to enter in a volleyball co-sponsorship next season. PHOTO COURTESY MONIQUE BALDWIN

In a final match up of rivals, Cameron Franks and Parker Dissinger led Blue Ridge past Susquehanna 3-0 on Senior Night at Susquehanna.

Susquehanna honored both its seniors and juniors as plans are underway for both schools to enter a co-sponsorship with Blue Ridge next season due to dwindling participation numbers.

Franks had 15 kills and 11 digs while Dissinger chipped in with 13 points and 10 digs. Calvin Scheideler and Kaleb Folk added seven and six kills respectively, while Garrett Conklin had 17 digs and Ben Bleck finished with 30 assists.

Susquehanna was paced by Bryce Baldwin who had 19 points, 10 kills, and six blocks.

Mountain View dropped a pair of games as the Eagles fell to Western Wayne 3-1 and Forest City 3-0.

The Lions were up 5-2 after five innings behind ace pitcher Nathan Rolka, but the patient Meteor batters forced five walks and got Rolka over 100 pitches.

The Meteors rallied with six runs over their final two at bats. Ethan Hitchcock doubled in a run and scored twice to pace Montrose. AJ Dovin had two hits and an RBI.

Nick Warriner scattered 9 hits while giving up five runs to take the win on the hill. Andrew Rapisardi closed the game with two solid innings of relief holding Trail to one hit.

Mountain View earned their first win of the season with a 14-4 win over Elk Lake.

Michael Fanelli had two hits and two RBIs and scored three times to lead the Eagles.

Mountain View broke the scoreless game open with 11 runs in the top of the fourth. Nick Craven earned the victory on the mound allowing four runs on six hits while striking out seven.

Be the first to comment on "Sports round up"