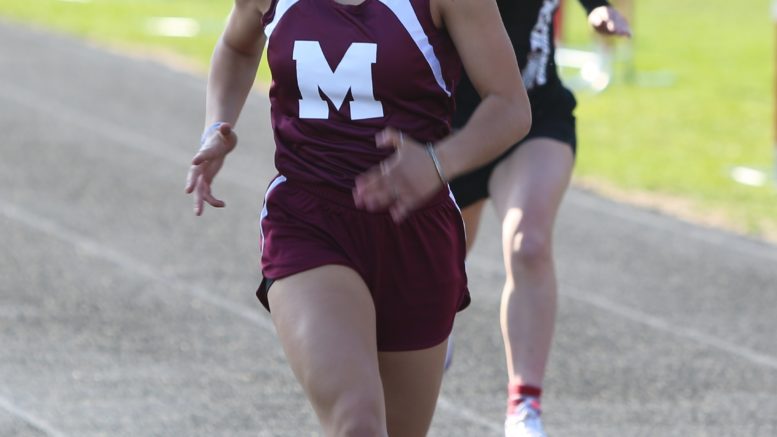 Montrose Area’s Chalice Guyette was selected to the Scranton Times All Regional Track team and the Female Track Performer for the Lackawanna Track Conference Division III-IV. PHOTO BY ED KING

Montrose Area’s Collin Chidester was named to the Scranton Times All Regional team and was named the Lackawanna Track Conference Division III-IV Male Track Peformer of the year. PHOTO BY ED KING

After claiming both the boys and girls Lackawanna League Division IV championships, Montrose was expected to be represented on the conference all-star teams. Their presence was felt beyond.

Chalice Guyette and Collin Chidester led the way as each was named Track Performer of the Year by the Lackawanna Division III and IV coaches and along with Liam Mead were named to Scranton Times-Tribune All Regional teams.

Chidester was brilliant his senior season capturing the gold medal in both the 110-meter and 300-meter hurdles at the District II championships. At the PIAA State Championships Chidester finished 11th in the 300 and 14th in the 110.

Liam Mead was named to the Lackawanna Track Conference Division III-IV all star team and to the Scranton Times All Regional Track team. PHOTO BY ED KING

Mead, who was also an All-Regional selection in Cross Country in the fall, culminated his outstanding Meteor career with a Gold medal in the 3200-meter and finished 19th at the PIAA Class 2A championships.

The Montrose Boys 1600-meter Relay team of Chidester, Brennan Gilhool, Henry Rogers, and Chucky Rohan was also named to the All Regional team after winning the District II championship and finishing eighth at PIAA championships.

Forest City’s Sarah Korty, who competes in a co-sponsorship with Carbondale Area, was selected to the All Regional team as a thrower. The senior earned a Silver medal in both discus and shot put at the District II championships and then garnered a Bronze medal at the PIAA championships in the discus and placed ninth in the shot put.

On the Boys Division III-IV All-Star team, Chidester and Mead were joined by teammate Rogers, who earned a nod as a sprinter after dominating in the 100-meter and finishing fourth at the District II meet.

Hannah Perkins, of Montrose, earned recognition in the Mid Distance as the junior finished second in the 1600-meter at the District II championships and finished 14th at the state meet.

Elk Lake’s Krista Jones was named to the Lackawanna Track Conference All Star Track team as a distance runner. Jones finished 15th at the 3200-meter race at the PIAA State Championships.

Jones placed second in the 3200-meter at Districts and finished 15th at the state meet. Korty earned a fourth-place finish at Districts in the 1600 and sixth place in the 3200.

Be the first to comment on "Track all-stars named"