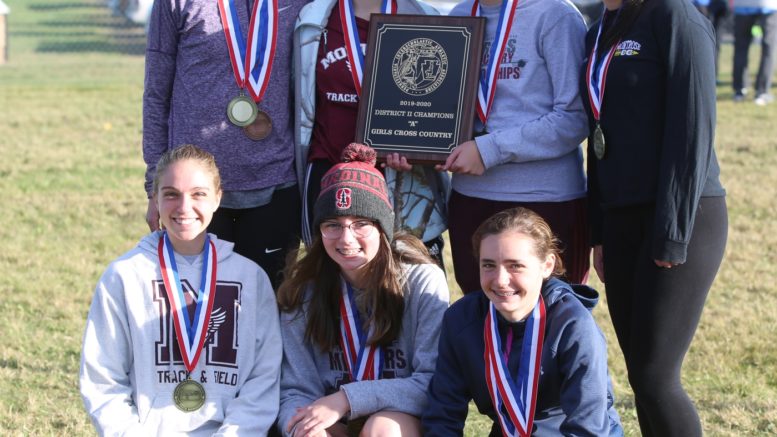 They left everything out there. Elk Lake’s Krista Jones and Montrose’s Hannah Perkins ran to exhaustion, but it led titles for each of them at the District II Class A Cross Country Championships. 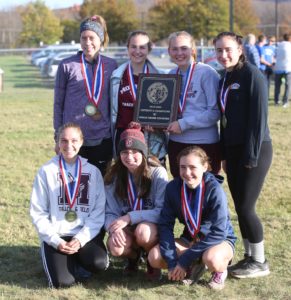 Jones captured her second individual title in a row as she crossed the finish line ahead of Forest City’s Rachel Korty and Perkins.

Jones finished 19:56 to lead a contingent of county runners that will participate in this weekend’s PIAA State Championships in Hershey.

Most of the race Jones, Korty and Perkins ran in a tight pack until Jones executed her plan to separate herself.

“The most important thing was the last downhill, at the two-mile mark, that’s when I made my move,” said Jones. “That was my strategy, to use the turns to stride off of and double my distance if I could.”

Despite finishing second Korty had no regrets about the race as she set a personal record and qualified for the state race after finishing one spot out a year ago.

“It went perfectly,” said Korty. “I ran as planned, she (Jones) just got away at the end.”

Perkins echoed that sentiment in that the race went as she had anticipated.

“The last half of the race played out as I expected it to,” explained Perkins. “When we got to the halfway point, I realized we were all together, and obviously Krista had a great day, but from that point we all ran our best races.”

Aside from the three top finishers and the Montrose team also qualifying for states were Mountain View’s Kathryn Long who finished fourth and Elk Lake’s Sadie Bosscher who placed sixth. Montrose Freshman Paige Brewer finished fifth between Long and Bosscher.

“I’m so happy, I wasn’t expecting to finish this well,” said Long.

While Long thought the conditions were great for racing it was at the final hill, she realized she had a chance to qualify.

“I was thinking, right after this hill you’re finished, and I’m right there,” Long explained.

Montrose eclipsed Holy Cross 56-80 to claim the team title and Coach Dean Brewer believes the team’s best running is ahead of them.

“We ran really well up front, but I think we can get even more from the back half,” said Brewer.

Brewer said the team will train hard for the upcoming state meet.

“I just told them, now the work begins,” said Brewer. “We don’t want to just be satisfied with getting there. We want to compete at the state level.”

Motivation for the team title is what enabled Perkins to push forward the second half of the race.

“Throughout the entire race I was just running for my team,” said Perkins. “I didn’t feel the best the second half of the race, but I knew I had to run the best I possibly could for my team if we wanted to qualify for states.”

The return to states was emotional for Perkins who after qualifying as a Freshman has had to endure several health issues the previous two seasons.

“I’m just so happy, it’s more than I could ever ask for, to be going back to states is a dream come true, and to do it with my teammates means more than anything,” said Perkins as she held back tears. 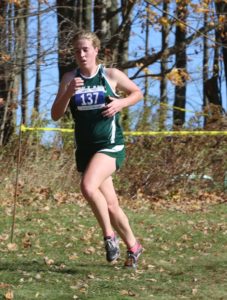 Elk Lake’s Sadie Bosscher bears down at the District II Class A Cross Country Championships. Bosscher placed sixth at the meet to qualify for this weekend’s PIAA Championships.

Also attending states as part of the Montrose team will be Annika Bixby, Lizzy Chidester, Kelley Warner, and Maggie Nebzydoski.

Be the first to comment on "Jones, Montrose take District XC titles"